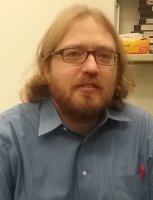 2022-2023: No office hours while on SLCL Dissertation Completion Fellowship

John is originally from the St. Louis area.  He completed his undergraduate education at Missouri State University with a Bachelor of Science in Education (German). After that, he was a teaching assistant in Austria through the Austrian-American Fulbright Commission and after ten years of teaching high school German he has completed his M.A. at the University of Illinois Urbana-Champaign. Now John is working towards a PhD also at Illinois.

John has taught German 101, 102, 103, 104, 211, and 251 in addition to being the course coordinator for German 103 during the academic year 2016-2017 as a teaching assistant at Illinois. He aspires to continue teaching German in the future in any setting possible including high school, community college, university, on-line tutoring, etc.. Since his arrival at the U of I Fall 2015, John has played a major role in the organization of Kaffeestunde (the weekly German conversation hour at Illinois). He studied at the Universität Greifswald during the 2017-2018 academic year where he taught a literature discussion section each semester with Zachary Hader. John passed preliminary examinations during the 2019-2020 academic year and as a result has ABD status. Now he is writing his dissertation about post-1989 German literature.

Conferences and Presentations (Literature and Culture)

"Mephistopheles, Faust, and the Peak of the Brocken on Walpurgisnacht:  Goethe's Use of Symbolism in Faust I's Walpurgisnacht Scene."  Focus on German Studies Graduate Student Conference, The University of Cincinnati, Cincinnati, OH, September 16th-18th, 2016.

HGMS: Co-director of The Future of Trauma and Memory Studies Reading Group

While traditional, exclusionary concepts of Heimat (home; homeland; belonging) remain relevant in the post-1989 German public sphere, my dissertation demonstrates that certain contemporary German novels envision a more inclusive, intercultural idea of home. Until now, the vast majority of work that has productively scrutinized conservative beliefs associated with the term Heimat has often condemned without acknowledging the human need for a sense of community (e.g. Blickle Heimat). My dissertation is critical of Heimat’s conventional imaginary against perceived Others, but transcends the Heimat/Anti-Heimat binary by analyzing literary instances of a multicultural, social sense of refuge. I contrast these examples of intercultural utopia featuring open belonging with enclosures in present-day society such as gated communities that perpetuate solipsism and isolation. The instances I analyze of both inclusive and exclusionary conceptions of home stem primarily from four novels published between 2000 and 2015. My project shows how post-1989 physical barriers prolong exclusionary sentiments of the right, and how the Berlin Wall conveyed certain pre-1989 illusory notions by the left of insulation from global capitalism. Hence, I illustrate that Othering by creating a pretense of separation alienates relations between geographically constructed social groups.

Building upon scholarly geocritical conversations, my project helps to denaturalize the culturally hegemonic artifice of separate places by reviving pre-1989 leftist ideas of international solidarity, while disapproving of separators from both the left and the right. Highlighting the fluid lines of belonging featured in four exemplary literary works, my project rethinks Heimat from a critical, yet hopeful perspective. Moving beyond antagonistic dichotomies of good vs. evil and victim vs. perpetrator, these literary examples show how acknowledgment of another’s unique challenges can interpersonally establish collective responsibility. In analyzing these illustrations of a radically new cross-cultural, intersubjective concept of open inclusion, my project provides insight toward establishing more all-embracing notions of home.